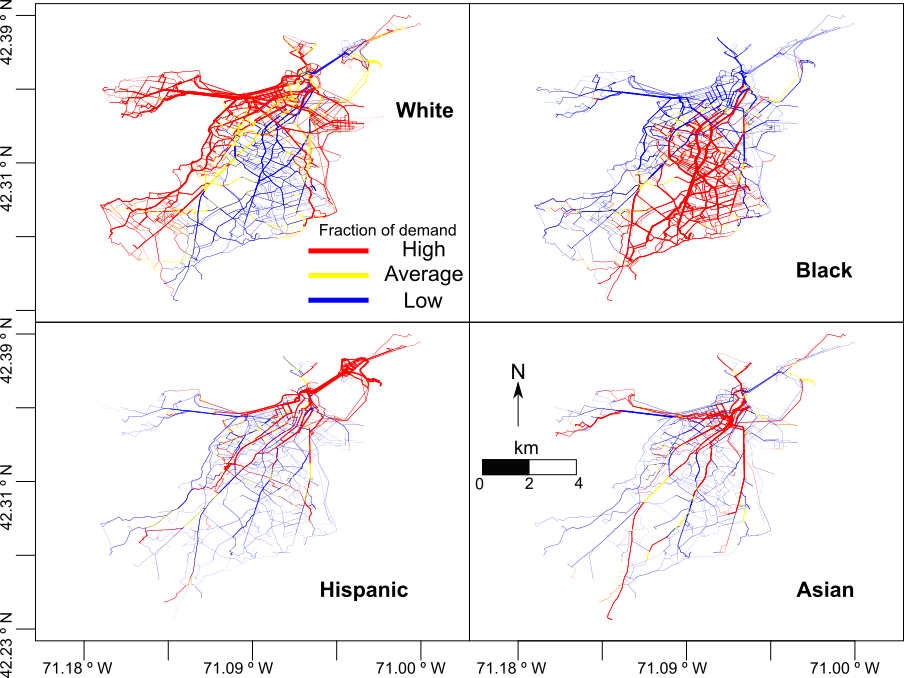 We present an urban science framework to characterize phone users’ exposure to different street context types based on network science, Geographical Information Systems (GIS), daily individual trajectories, and street imagery. We consider street context as the inferred usage of the street, based on its buildings and construction, categorized in nine possible labels. The labels define whether the street is residential,  commercial or downtown, throughway or not, and other special categories.

We apply the analysis to Boston city, considering daily trajectories sampled from a model based on Call Detail Records (CDR) and images from Google Street View. Images are categorized both manually and using artificial intelligence (AI). We focus on the city’s four main racial/ethnic demographic groups (White, Black, Hispanic and Asian), aiming to characterize the differences in what these groups of people see during their daily activities. Based on daily trajectories, we reconstruct most common paths over the street network. We use street demand (number of times a street is included in a trajectory) to detect each group’s most relevant streets and regions. Based on their street demand, we measure the street context distribution for each group. The inclusion of images allows us to quantitatively measure the prevalence of each context and points to qualitative differences on where that context takes place. Other AI methodologies can further exploit these differences.

This approach presents the building blocks to further studies that relate mobile devices dynamic records with the differences in urban exposure by demographic groups. The addition of AI-based image analysis to street demand can power up the capabilities of urban planning methodologies, compare multiple cities under a unified framework, and reduce the crudeness of GIS-only mobility analysis. Shortening the gap between big data-driven analysis and traditional human classification analysis can help build smarter and more equal cities while reducing the efforts necessary to study a city’s characteristics.