This work focuses on traffic congestion and unifies different approaches, perspectives, and fields  into a single science of traffic. A century passed the age of the automobile, traffic networks have  been described as engines of global growth and prosperity. However, their uninformed expansion  is a leading cause of pollution and other negative externalities. The collapse of the traffic network,  i.e. network-wide congestion, causes a loss in social and economic opportunities and increased  carbon emissions; however, it is common across cities worldwide. In our endeavor towards greener  and more livable cities, a clear understanding of traffic network congestion is necessary, to  simplify science informed policy. A unified science of traffic networks facilitates the planning of  cities from a social, environmental, and economic perspective.

Current models of urban traffic congestion implement either a network level or link level  perspective. Both perspectives have proven useful in understanding urban traffic congestion – the  network level perspective capturing the aggregated global system dynamics and the link level  perspective accounting for the dynamics of individual roads. Despite the abundance of literature  on both perspectives, they have not yet been unified into a single science of traffic consistently  describing the dynamics of the congestion at both scales simultaneously. Traffic research combines  diverse fields such as engineering, city planning, and physics. This has resulted in different fields  preferring different analysis metrics which further hampers communication and research cohesion. In this work, we address these issues by connecting the two perspectives (link and network) for  five major cities worldwide: Boston, Los Angeles, and San Francisco Bay Area in the United  States, Rio de Janeiro in Brazil, and Lisbon in Portugal. We begin by modeling the traffic networks  through state-of-the-art simulations spanning an extended morning traffic peak.

We then assess and connect different approaches and perspectives used by various fields to study  traffic. In particular, we uncover a correspondence between network level traffic performance  measures including the macroscopic fundamental diagram (MFD) as discussed by Helbing in Eur.  Phys. J. B 70, 229-241 (2009) and the flow over capacity measure as proposed by Çolak et al.  in Nature Comm. 7:10793 (2016). Due to its ability to assess the network state with minimal data,  the MFD has received a lot of attention by traffic engineers since it allows to parsimoniously  model, manage, and optimize traffic in urban networks. On the other hand, \Gamma, as proposed  by network scientists, measures traffic network efficiency in terms of vehicles-travelled  kilometers, thus appealing to urban planners. Therefore, by combining these measures, we unify  efforts by different fields to understand and model traffic at the network level into a single  actionable framework.Study case in Rio de Janeiro 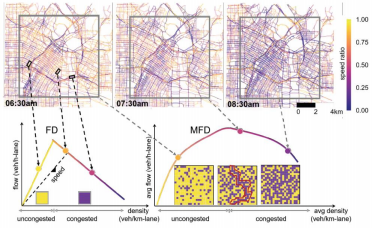 Building upon this unification process, we use percolation theory, inspired by Li et al. in PNAS  112, 669-672 (2015), to characterize the growth of link level congestion from small isolated  pockets of congestion to the sudden emergence of a single giant connected cluster of congestion.  We then correlate this process with the evolution of the network level measures. Through this, for  the first time, we directly connect the link level and network level perspectives as well as uncover  the deeper meaning of features observed in the network level measures. Furthermore, because  percolation is a tool for assessing network resilience, our results have the potential to enable planners to take advantage of the minimal data requirements of the network level measures to  assess road network resilience. While traffic is typically studied with urban planning in mind, the  actual impact of traffic congestion is on individual drivers. Thus, we relate our network level  measures to their impact on individual drivers through the average percent congestion (equivalent  to the TomTom Traffic Index). This process reveals a universal relationship which holds between  cities around the world and should allow the same sparse network level data and resiliency models  to be translated to the average driver.

Each of these results is interesting in its own right; when combined their implications are even  more significant. The unification of perspectives, approaches and fields of study into a single  Science of Traffic updates our understanding of urban traffic substantially. It allows traffic  scientists to draw on knowledge from a coherent set of models and approaches and to communicate  their results more efficiently to other researchers in the field.